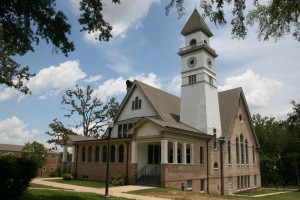 The Tougaloo 1990s Eagles Club is designed to benefit Tougaloo College through increased Alumni participation, fostering of partnerships and monetary and other contributions.  The club also hopes to improve connections and networking between Alumni and friends of Tougaloo.  The club, a voluntary organization that does not take the place of any Tougaloo College alumni association, consists of any individual who attended Tougaloo College during the 1990s.

The organization got its start in 2013 when planning a 2014 commencement-weekend decade reunion.  The events of that weekend, attended by a record number of alumni from the 1990s decade, served as an agent of community and support for the college and the alumni.  Approximately 600 people attended the weekend’s events, which resulted in $10,000 in donations to Tougaloo.

This group now seeks to transform that successful weekend into a constant source of furtherance and cooperation for the benefit of Tougaloo, its students and its alumni.  The club focuses primarily on the 1990s reunions, but also plans to be a continual source of information and networking for alumni as well as an opportunity to engage alumni in short-term and/or long-term projects for the benefit of Tougaloo.